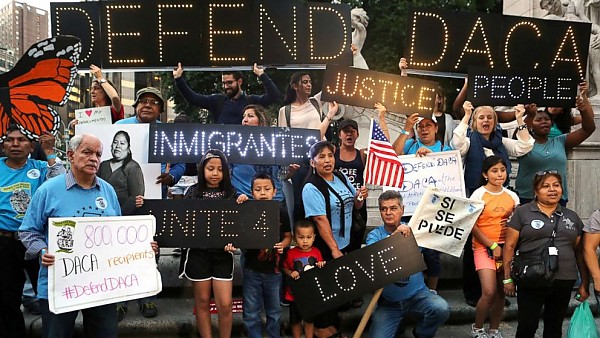 Passing a “clean” Dream Act to legalize “Dreamers” will spur a new wave of illegal immigration and create a new population that will need an amnesty 10 or 20 years in the future, the government’s chief deportation official said Tuesday.

Thomas D. Homan, who has been acting chief at U.S. Immigration and Customs Enforcement since the beginning of the Trump administration, said even the talk of a renewed immigration debate on Capitol Hill will entice people to make the perilous journey to try to jump the border, saying that during his nearly 35 years in immigration enforcement, he has seen it happen “every time you talk about some sort of benefit” such as legal status for immigrants who crossed the border illegally.

“It certainly increases illegal crossings, that’s been proven for the last three decades I’ve been around,” Mr. Homan said at an event sponsored by the Center for Immigration Studies.

In a valedictory address as he prepares for retirement at the end of this month, Mr. Homan said any move by Congress to legalize Dreamers who are part of the Obama-era DACA program must also get at the root causes that spurred them to come years ago in the first place. Otherwise, he said, the country is setting itself up for yet another amnesty in the future.

The House is poised to begin such a Deferred Action for Childhood Arrivals debate later this month, under pressure from Democrats and Republicans rebelling against President Trump. They back a bill that would grant full citizenship rights to those who crossed into the U.S. illegally in exchange for a study of future border security needs.

Mr. Homan said that will do nothing to change the incentives such as jobs and easily exploited U.S. laws that serve as enticement for people to make the attempt to enter illegally.

He said cracking down on sanctuary cities and approving mandatory E-Verify checks for all businesses to validate their employees’ work status should be included if Congress is serious about tackling illegal immigration.

And he pushed back against people who have accused his agents of being the equivalent of Nazis, saying it’s the laws on the books that call for illegal immigrants to be arrested, deported, and, in some cases, even face criminal charges for how they entered the U.S.

“If you think ICE is racist, is Congress racist because they enact these laws?” Mr. Homan said.

Mr. Homan has been a lightning rod during his time at the top of ICE, and his appearance at the Center for Immigration Studies drew condemnation from a top congressional Democrat who accused the center of being a “hate group.”

Rep. Joseph Crowley of New York, chairman of the House Democratic Caucus, cited a controversial claim by the Southern Poverty Law Center in deriding the center, saying it spreads “abhorrent viewpoints, including white supremacism and anti-Semitism.”

Mr. Homan fired back, demanding to know why Mr. Crowley didn’t condemn a fellow New York lawmaker, Rep. Yvette Clarke, who earlier this year rallied outside an ICE building in New York and called it “the headquarters for the Gestapo of the United States of America.

Mr. Homan saved his sharpest jabs for leaders of sanctuary cities, whom he accused of endangering their own communities, as well as his officers. He said he’s not asking local officials to enforce immigration laws, but instead wants the same courtesy they show other law-enforcement agencies by giving ICE access to jails to screen and arrest wanted targets.

He said sanctuary leaders have a choice: His officers can work their jails, arresting people with criminal records, or else go out into the communities to make arrests, with the likelihood they’ll end up nabbing immigrants who entered the U.S. illegally without serious criminal records.

“Would you rather have ICE agents working in your county jail or in your neighborhood?” he said.